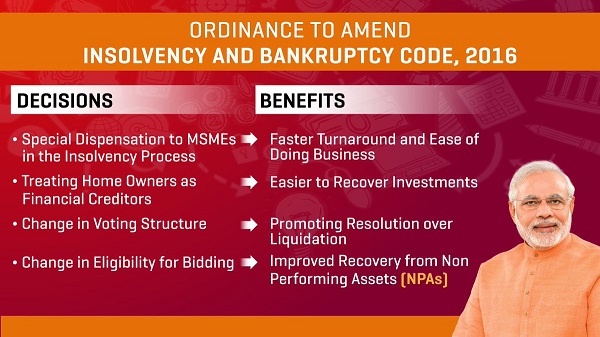 June 6, 2018- a memorable day indeed from the home-buyers’ perspective. In its recent ordinance to amend the Insolvency and Bankruptcy Code (IBC), the Government of India has declared that henceforth home-buyers in ailing real estate companies would be recognized as financial creditors in the resolution process.

Corporate affairs secretary Injeti Srinivas confirmed that the ordinance would be one prime instrument for every single home-buyer to approach the National Company Law Tribunal to commence insolvency proceedings against a realtor. Based on the signed agreement between the buyer and the seller, if the real estate company goes under water, buyers will have to prove themselves as legitimate creditors in order to claim their rights as lenders.

The rules regarding buyers’ representation is soon to be published. As per the officials, there will be two agreements in some of the states in India; one for the land and the other for the house.

An official statement said: “The Ordinance comes as a significant relief to home buyers by recognizing their status as financial creditors. This would give them due representation in the CoC and make them an integral part of the decision-making process.”

Asking about the impact of this ordinance on the business of reality esp. on the home-buyers, the Chairman – National RERA Committee, National Association of Realtors, India, Mr. Mahesh Somani said, “This is undoubtedly a great move by the government to boost the morality of the home-buyers. Over the years buyers have been hackled by the realty stake holders in terms of deliverance and quality assurance. This one recognition will set them on a par with the banks during the proceedings.”

“Projects like Jaypee, Amrapali and many more that have reeling under the insolvency proceedings, with this secured financial creditor tag, respective home-buyers can now claim their interest during the resolution process and banks will ensure that in no way it would be compromised,” –  added Mr. Somani.